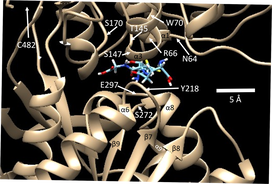 ​Title:  Extracellular calcium receptor as a target for glutathione and its derivatives
PI: Jeffrey L. Ram
Extracellular glutathione (GSH) and oxidized glutathione (GSSG) have been shown to modulate the function of the extracellular calcium sensing receptor (CaSR). Crystallographic and modeling studies of CaSR show a binding pocket in the extracellular domain of CaSR large enough to bind either GSH or GSSG.   The binding pocket of CaSR is also large enough to accommodate other glutathione derivatives, including the naturally occurring oxidized derivative L-cysteine glutathione disulfide (CySSG) and the compound cysteinyl glutathione (CysGSH).  Modeling comparisons of the binding energies (ΔG) of CySSG and CysGSH to CaSR indicate that both cysteine derivatives may have greater affinities for CaSR than either GSH or GSSG.  GSH, CySSG, and GSSG are found in circulation in mammals and, among the three, CySSG is affected by HIV/AIDs and aging more than either of the other two compounds. The beta-carbon linkage of cysteine in CysGSH may model a new class of calcimimetics, exemplified by etecalcetide. We propose that circulating glutathionergic compounds, particularly CySSG, may mediate Ca-regulatory responses via receptor-binding to CaSR in a variety of organs.  These organs include the well-studied CaSR-containing calcium regulatory organs of the parathyroids, kidneys, and bones. Glutathionergic compounds may thus have ligand-binding functions mediated through CaSR complementary to their roles in redox regulation and detoxification.  The glutathionergic binding site(s) on CaSR are suggested to be a target on the CaSR structure for development of drugs that can be used in treating kidney and other diseases whose mechanisms involve CaSR dysregulation.  The research plan is to investigate ligand-binding energies with purified CaSR, to study CySSG and glutathione sensitization of CaSR activation by calcium in kidney cells, and to investigate potential feedback loops of calcium to the major sources of circulating glutathione in the body.
Spawning in male Nereis succinea: a paradigm for glutathionergic receptor-mediated responses
The marine polychaete has been shown to utilize cysteine-glutathione-disulfide(CySSG)  as the pheromone that female N. succinea  use to stimulate male N. succinea to respond with a "nuptial dance" and ejaculation.  The behavior stimulated by N. succinea in nature is illustrated in the video at the link "Nuptial Dance of Nereis succinea" (click on the title of the video to see it).  Recent experiments, conducted in space provided by Dr. Kirstin Meyer-Kaiser (Redfield Laboratory of Woods Hole Oceanographic Institute) by Jeffrey Ram and Michal Ram showed that animals responsive (measureable ejaculation) to CySSG also responded in a similar way to etelcalcetide, at concentrations about 100-fold higher than required to elicit responses with CySSG.